Forming an instant favourite part of the outdoor seating arrangements, we have an old fairground Waltzer carriage from Blackpool Pleasure Beach to be set next to the Wagon.

Having been on the lookout for a Waltzer carriage for some time, we happened across an advert for the sale of old ride stock from the Pleasure Beach in September 2019. The carriage was listed as being from a ride called “The Whip.” So strictly speaking, it seems that it is not a Waltzer chair at all, but we felt that calling it the “Whip Chair” was not particularly a direction we wanted to go in!

The Whip was manufactured by WF Mangels of Coney Island, USA. Blackpool’s Whip cost the Pleasure Beach $4,700 and according to a plaque on the ride, operated  from 1921. There are suggestions that it actually arrived in 1914, just as war was about to break out.

See the Whip in action

When it was removed from the Pleasure Beach in September 2008, it was the oldest ‘flat ride’ (i.e. fairground-style ride) at the park. At the time it was the only operating full-size Whip in the UK, and the only surviving European Whip.

Is it really a Whip Chair?

Our carriage looks larger and differs in shape from those in archive pictures of the Whip ride, both the one at Blackpool and ones in other locations, although it does share the red and white “sun-burst” livery. These original carriages appear in a picture dated 2004, at a time when the ride was being wound down, so a refit at this point seems unlikely. Ours is also a fiberglass shell, whereas the Whip chairs appear to be metal, and there is evidence that our chair has been yellow at some point.  According to the Pleasure Beach our carriage was repurposed as seating at The “Coasters American Diner” on the Pleasure Beach. This was refitted in 2018, but images suggest the colour scheme was red and white, which might account for a respray.

A carriage like ours in situ in the American Diner

The Nose differs from the whip cars

Our carriage shape has more in common with the carriages from “The Skid”, a fairground version of the Whip based on a circular rather than rectangular track. 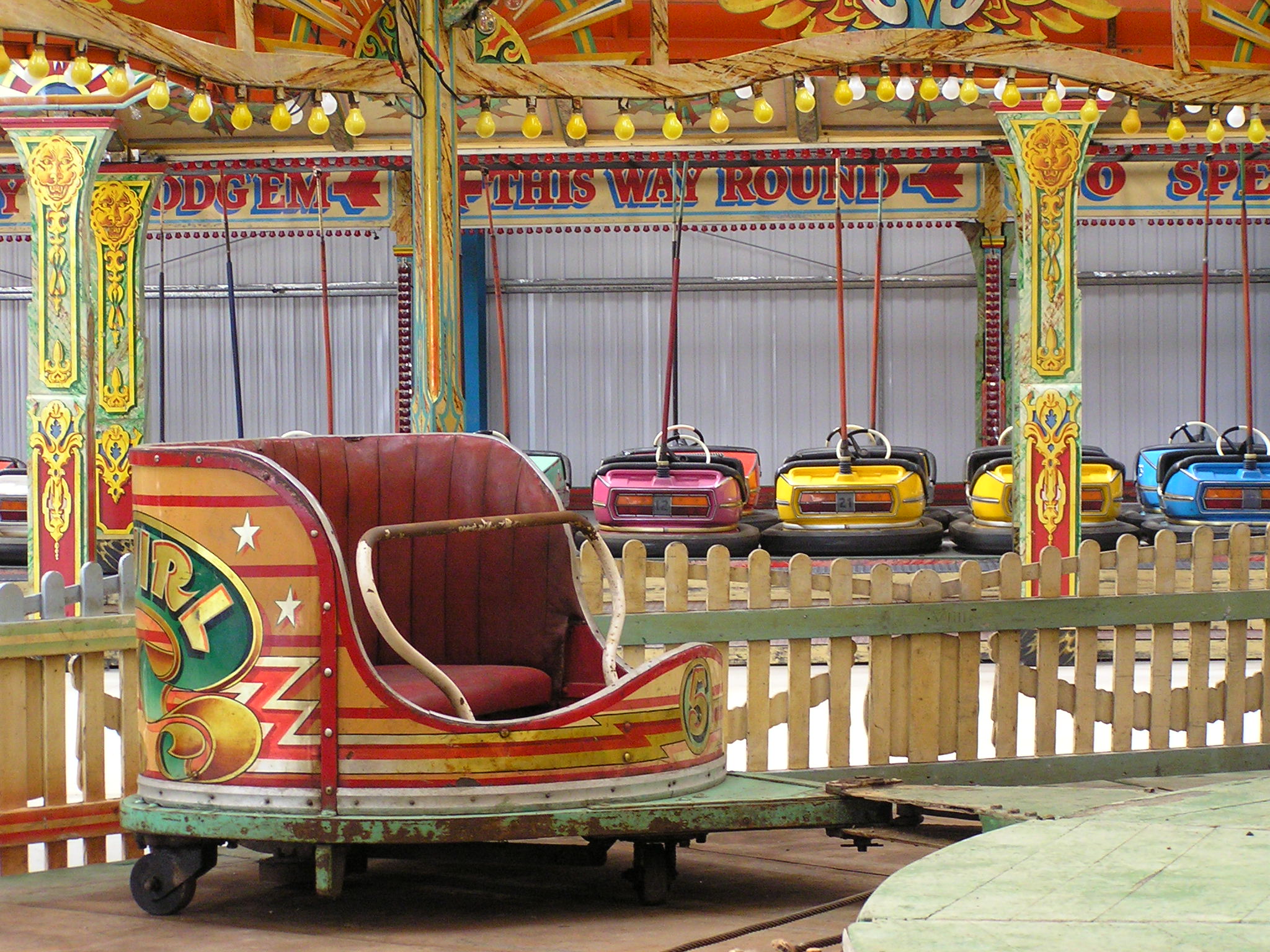 The Pleasure Beach had a “Skid” in the shape of a ride called “Ben Hur” which closed in the 1980’s. However, there is no evidence of the protruding pivot point on the wheeled base-plate (ours is missing but it was still attached on one of the others) as can be seen in the picture above. In carriages from both the “Whip” and the “Skid” the seating takes the form of a bench facing the pivot point, whereas ours has curved seating facing a more central point. This could of course be due to the different materials used in construction.

And anyway, I’m not sure “Skid Chair” moves us in a better direction than “Whip Chair”.

So perhaps it is a Waltzer Chair after all; the circular wheeled base-plate and more central facing seating would support this idea. The Pleasure Beach had a waltzer-in-the-dark ride called the “Black Hole” that ran from from the 1980s until 2006, and this later construction date might account for a fibreglass build.

Waltzer chair with a nod to inwardly facing seating