It was February ’14 and we were originally looking for a Shepherd’s Hut to give us an extra bedroom for when my Mum came to stay. Somewhere along the way, we got a little distracted!

A friend suggested that it might have been an example of what he termed “red wine ebaying” but it was really not that simple; for starters we were both stone cold sober. The reality is that is probably had more to do with a misplaced sense of “can-do” caused by watching too much of “George Clarke’s Amazing Spaces.” Either way, one half-hearted bid on your favourite auction site later and we found we owned a fairground showman’s caravan.

The first challenge was that the wagon was on a fairground wintering site some 130 miles away in Bradford. As soon as the opportunity arose, we hit the road to see just what it was we had purchased. 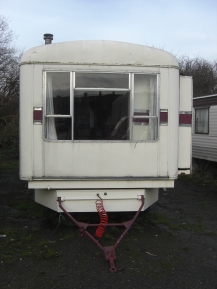 The Wagon when we first saw her on a fairground wintering site in Bradford. End view 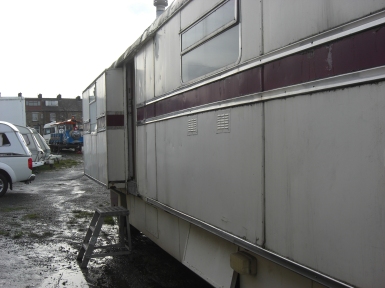 The Wagon when we first saw her on a fairground wintering site in Bradford. Side view.
For his part, the vendor had left us with no illusions about the state of repair, went to great pains to reiterate the size of the job, and offered us the opportunity to back out of the deal. Even with these words of caution ringing in our ears, we were still taken in by the scale and potential of the thing. We had bought a huge space for a fraction of the cost of that Shepherd’s hut. Sure, it would need gutting and rebuilding, but hey, how hard or expensive could that be?

To recap:
“Sure, it would need gutting and rebuilding, but hey, how hard or expensive could that be?”

It didn’t take long to begin answering those questions as we tried to start organising transport. With a number of flat tyres, the wagon was no longer roadworthy so it needed to be transported on a flatbed truck. “No problem”, we thought, aware of the steady stream of wide loads passing our house carrying mobile-homes to coastal sites. Sadly the size that we found so appealing was the thing that was putting the hauliers off.
We drew a blank, and it looked like the whole project was dead in the water before it had even started.

We contacted the vendor to let him know, fully expecting to lose the deposit we had put down on the wagon. “Leave it with me” said the man, and a couple of weeks later the Wagon arrived on the back of a low-loader used for recovering coaches. Unsurprisingly, such a piece of kit does not come cheap, but at least we had it on site. 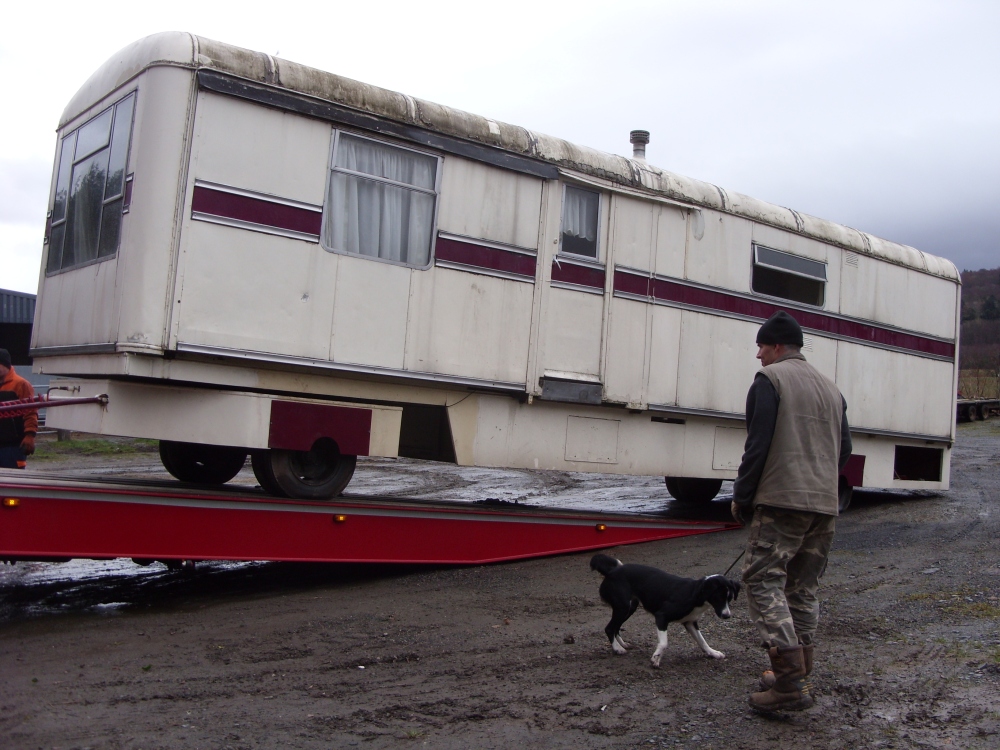 Well, actually, it wasn’t on site. A truck of a size that can handle a broken-down coach needs a bit of space to operate, and certainly doesn’t want to be getting involved with our steep drive. As such, the delivery was made to our neighbour’s cow yard just over the road, and there she languished (causing quite a stir in the local community) while we pondered the next move.

The Wagon is towed and pushed up the steep driveway.

In March ‘14 the final part of the move came in the shape of another neighbour; this time a family of farmers with a very can-do attitude, a hands-on approach to problem solving, and with access to big tractors and diggers. We only knew the move was happening when the wagon was halfway up the drive, and by this point we had already lost one gate post and a small silver birch tree to allow passage. There was much for us to worry about, and little we could do to help, so we went and hid indoors until it was all over! 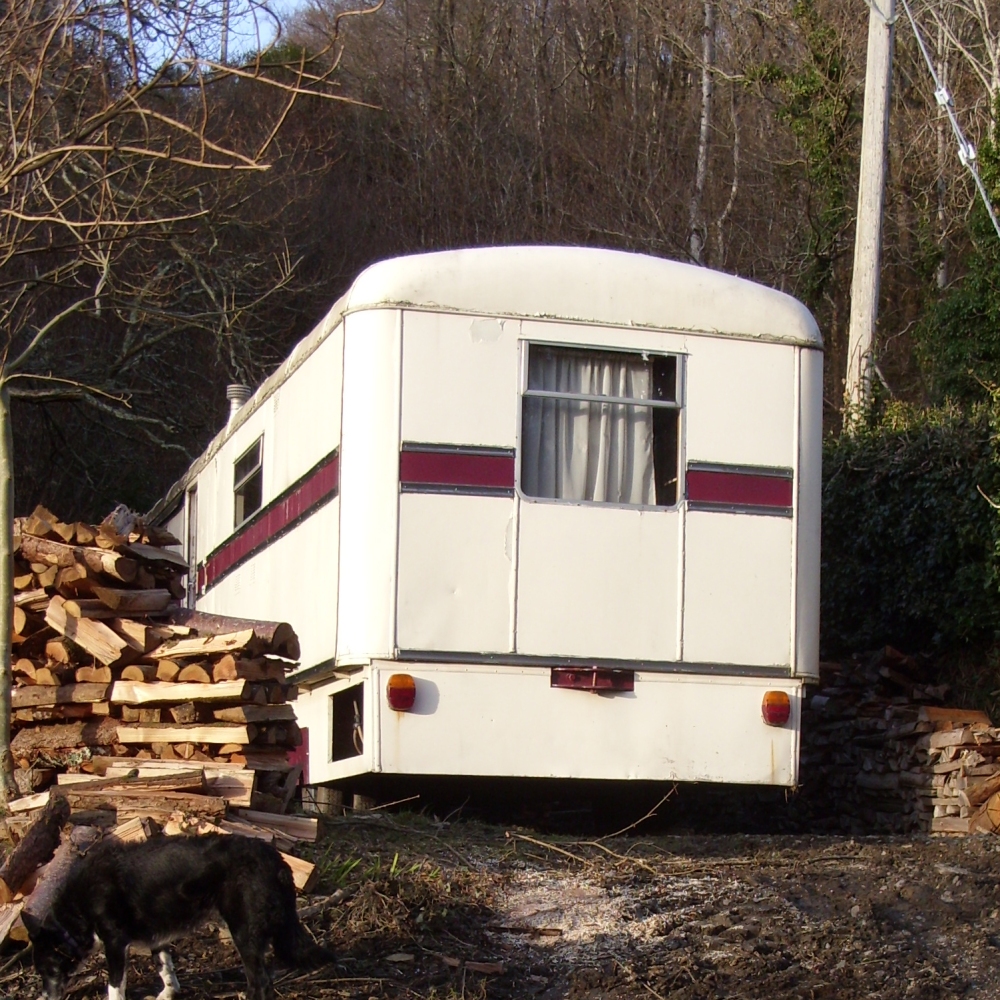 Positioning of the Wagon all done and dusted. Only the mud and tyre tracks tell of the struggle overcome.

Is it a restoration?

Is it a restoration? A renovation? A rebuild? A rehabilitation?

We certainly wanted the Showman’s Wagon to keep a sense of its history, but this was by no means intended to be an authentic restoration. For example, as the Wagon is no longer required to be road-worthy, this gives us a more of a free-hand with the design of interior fittings and storage.

Additionally, we want to add a sense of the things we like about this small corner of Wales, in terms of wood, fabric and stone.

Batten (or batter) down the hatches

With the Wagon on site, we wanted to reduce any further deterioration in condition as best we could. In an ideal world, such restoration work would be carried out in a nice dry barn, but we had to settle for an exposed position on a hillside with a direct line to the prevailing wind. Another glaring problem (literally) was the white colour-scheme which stuck out like a sore thumb. We decided that the best answer to both issues was a great big camouflage tarp which was to be held in place by tying down onto logs and railway sleepers around the outside. For extra security, we set about trussing the whole thing down with blue nylon rope. Given the lightweight rope and strong wind, we had some difficulty making the crosses over the wide birth of the Wagon and so tied a small log to the end to give it some weight. On about the third pass, the rope made the cross and then formed a perfect pendulum to stuff the log through the side window.

This, we considered, was an inauspicious start to proceedings.

All tarped up and no place to go. Certainly a reduction in visual impact

As far as we knew, the caravan was constructed from aluminium panels over a timber frame, with a pitch pine floor. Between initial purchase and final placement we’d been reading up on caravan renovation and I’d been traumatised to read that in the 50’s it was not uncommon to use asbestos as wall insulation. I had images of men wandering around in haz-chem suits and a rapidly diminishing bank balance. As such one of the first tasks we undertook was to remove the panels from the bedroom end of the Wagon to see what we were up against.

There was good news and bad news.

On the good side, and perhaps most importantly, the insulation was glass fibre, which was a great relief. The bad news was that, much as we feared, the timber frame was completely rotten, and in retrospect it was some wonder she survived the journey across the Pennines. Somewhere between good and bad was the fact that the timber frame was far from high-end coach building; it made no odds to the final outcome, but made me feel more confident that I could rebuild like-for-like. 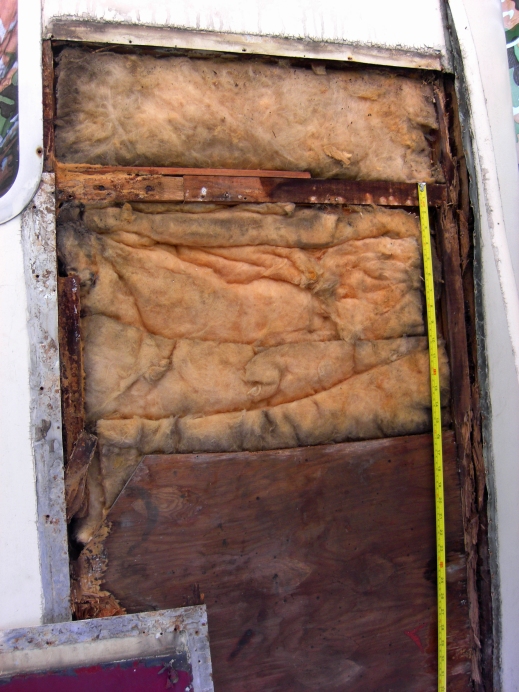 Wet, rotten and slimy, but at least it’s not asbestos! The first panel comes off.

Our plan was to work through the caravan, from one end to the other, pulling apart, making good and rebuilding as we went. The alternative of pulling it all to bits and rebuilding from scratch was less appealing as we were fairly confident we would never get it to fit back together again.

I had a romantic notion that I would reframe the entire wagon in oak, and not just any oak, but oak milled by my own fair hand from a massive wind-blown specimen that I worked on a few months earlier. However, once the first panels were off and we were able to see the frame, I was able to make a rough calculation about the length of wood required for each metre of wall and quickly dismissed my small stack of oak spars and planks as woefully inadequate. Heading down-market somewhat, we opted to reframe with tanalised slate-bats joined as L or T shapes for strength. Cut ends were to be treated with creosote, and the surfaces to be in contact with the metal sheeting (which would likely attract condensation) would have a coating of bitumen paint. 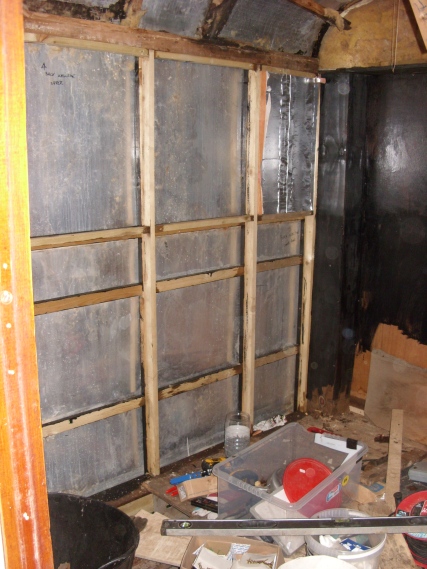 Re-framing of the bedroom wall with T-shaped pillars made from tantalized slate-bats.

Internally, the walls were lined with formica faced ply-wood sheets which formed an excellent moisture barrier, and as a result hid a multitude of sins in terms of water ingress. We intended to reuse as much as possible to reline the walls, but had set our hearts on a tongue-and-groove finish as the final look.

Having established the rotten-but-asbestos-free status of the walls there was what might be called a “failure to commit” in the process of getting started. A sudden dawning of the magnitude of the task ahead perhaps. We were accessing the now pierced wall of the bedroom via the hole in the wall quite happily, but it suddenly became much more attractive to build the staircase to reach the wagon door.

I had already cut oak planks to make the stair treads from a wind-blown tree at a neighbour’s campsite, and we had made stringers (the bits either side that support the treads) and other frame-work timber from Japanese larch from our own woods. It was simply a job of cutting them to size and assembling (!)

As usual, the job was somewhat more complex and time-consuming than I had anticipated, but the results were quite pleasing though I say it myself.

First assembly of the steps. Surprisingly, they seem to fit together in the right configuration.

Oak treads and larch stringers….and willow charcoal for marking out. All home made!

The steps with platform in position at the wagon.

Now no excuses for not getting on with it!

As our initial explorations through the wall were at the bedroom end of things, when we finally got motivated, that was where proceedings would begin.